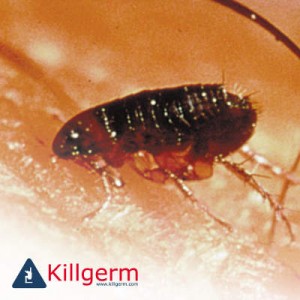 There are over 1,000 different species of flea through out the world and about 60 of these are found in the UK. Like the mosquito, fleas are responsible for the spread of many diseases, some of which have challenged the very survival of certain warm blooded species including man.

The black death in 1348 was passed from rats to humans by the Oriental Rat Flea, and in more recent times the Rabbit Flea was mainly responsible for the spread of myxomatosis among rabbits. The different species of flea have a number of things in common their reproductive life cycle are similar and all adults feed on warm blooded creatures.

From a pest control perspective, the most common fleas that are encountered are the Cat Flea, Dog Flea and Bird Fleas, the later being made up of a number of different species, and not surprisingly domestic animals such as cats and dogs are normally host to the first two.

The reproductive life cycle of a flea is what’s known as complete metamorphosis meaning four stages Egg, larvae, Pupa and Adult. The eggs are laid in clothing, bedding or the fur of the host and will hatch in about 2 to 3 days depending on temperature.  The larvae will then spend the next three weeks feeding on protein in the form of dead skin or the droppings of adult fleas. The larvae will then pupate and will only hatch when stimulated by vibration and movement, flea pupa can remain dormant for up to six months, so even a home that has been empty for months can still harbour active fleas.

Advanced Pest Management has been dealing with flea infestations for many years, many of the commercial clients that we service are Hotels, Nursing homes and Holiday Homes where visiting pets have left the problem behind.

I am the owner of Advanced Pest Management Ltd based in Market Drayton, Shropshire. Advanced Pest Management Ltd specialises in ridding business in Shropshire, Staffordshire and Cheshire of pests in their business premises. We can get rid of birds, rodents, and insects, then proactively control further infection with preventive barriers like mesh screens and flyscreens.